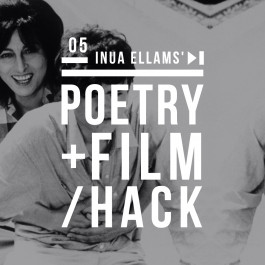 This instalment of the Poetry + Film / Hack presents critically acclaimed and cult Italian classic, Mamma Roma. Written and directed by Pier Paolo Pasolini, Mamma Roma, tells the story of the middle-aged Mamma Roma, who after years working as a prostitute in her Italian village, saves enough money to buy herself a fruit stand in order to begin a new life and reestablish contact with the 16-year-old son she abandoned when he was an infant. But her former pimp threatens to expose her sordid past, and her troubled son seems destined to fall into a life of crime and violence.

This event also celebrates and marks the centenary of Pier Paolo Pasolini’s birth, regarded highly for his poetic approach and method in all his directorial work.

This event is a collaboration between Inua Ellams and Spazio Griot and produced by Deborah Yewande Bankole.

Join us for another instalment of the Poetry + Film / Hack, a no fuss, no frills in-conversation between live poetry performance and film, deepening, heightening and expanding the cinematic experience. The end of the film is just the beginning.

This event will be BSL interpreted.

Mylène Gomera is an award winning actress, voice-over artist and poet. As a Mental Health advocate, focusing on migration, trauma and movement psychology, her journey includes extensively working with various Eritrean & Sudanese refugees. She performs in theatre, film and television entities throughout Europe, the Middle East and Africa. Having grown up in different countries around the world, she sits at the intersection of many cultures and is fluent in 5 languages. Her long experience and observational expertise coupled with her dexterity to interpret people’s body language and presence allow her to enter and transform into different mindsets. She enjoys volunteering for the Injera Club in London, a refugee support service run by members of the Eritrean community

Saleh Addonia was born in Eritrea from an Eritrean mother and an Ethiopian Father. As a child and amidst the war of independence, he survived the Om Hajar massacre and migrated to Sudan. He grew up in refugee camps where he lost his hearing at the age of 12. Addonia spent his early teens in Saudi Arabia and arrived in London as an 18 years old refugee. He has published a short stories collection in English, titled: The Feeling House. And in Italian, titled: She is Another Country, translated by Nausikaa Angelotti and published by the Swiss/Italian house, Casagrande editions. His work appeared in the Italian newspaper Il Sole 24 ORE and in Specimen and Zam magazines, and in an anthology, Lucifer Over London. He has been awarded Royal Societies for Literature, Literature Matters Awards 2021.

Chloe AyoDeji Filani, Artist of Poetry, Performance, Black Feminism, Public Speaker and workshop facilitator. Chloe’s artistic practise/poetry works with her lived experience of being a black trans woman and the broader themes of identity and power structures and finding hope in the imagination and storytelling.

Fatima Bouhtouch, born in Italy (near Modena) from Moroccan parents, is the author of Come alberi (Edizioni DrawUp 2019), a collection of poems inspired by her experiences as a second-generation Italian. In January 2021 she delivered a powerful performance at the TV contest Italia’s Got Talent. She is an undergraduate student in Arabic, Islamic and Middle Easter Studies at the University of Leeds.

Judith Opara is a writer and social researcher, author of her debut book titled “Italian Negro is not Even a Cuss”. She was born and raised in Italy and is originally from Nigeria.

All bookers to this event can redeem their ticket upon entry with a drink. Tickets can be redeemed for either a cocktail, bottle of beer or a soft drink.

The event takes place in the context of Whose Wor(l)d is this? Diverse Voices in Urban Literature in the UK and Italy a British Council funded project that explores and promotes live literature practices in relation to music and film, with dedicated events between Rome and London, and the publication of a zine.