A phantasmagorical body clad with Netsela from the waist up makes popcorn. The sound and matter that comes out of it slips into space and drags the floating body-ski with it. A chosen point will be the base from which to erect the arm of freedom, abandon the wetsuit and out come the open. There are small rituals that accompany the lives of all peoples. That of popcorn in Eritrea is a ritual that finds a place within festivals, birthdays, weddings, dances; but rather than eating it, popcorn here is thrown, made to fly through the air as if it were snow-carnival confetti and then thrown on the ground, scattered as if to mark a zone of cheerfulness where thrift gives way to the sign of abundance and 'ephemerality. 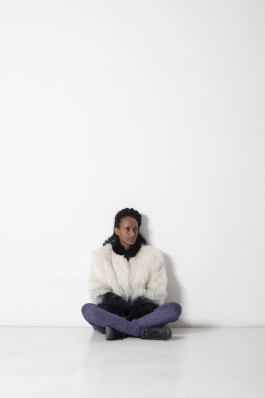 (Eritrea, 1978), lives and works in Bologna) began her artistic career in 1998, as actress/performer with Teatrino Clan- destino until 2001. In 2002, she attends Corso Europeo di alta formazione per l’attore, direct- ed by Cesare Ronconi of the Teatro Voldoca and she continued the collaboration as an ac- tress until 2010. From 2001 to 2005 she was an active part in the research collective Open, where after the performance opentolikemu- namussie (2005) she began to investigate her own ways of being on stage. Muna Mussie’s work investigates the performing arts and the scenic languages through gesture, visual and words, to give shape to the tension that arises between different expressive poles. Recent performances and installations in- clude: PERSONA (2022), Bientôt l’été (2021), PF DJ (2021), Oblio (2021), Curva Cieca (2021), Curva (2019), Oasi (2018), Milite Igno- to (2015). Other exhibitions include: Bologna St. 173, Archives sites, Milano (2021), Punteg- giatura (2018). Her work has been presented in several oc- casions at: Art Fall/PAC Ferrara, Xing/Raum e Live Arts Week Bologna, Fondazione Sandret- to Re Rebaudengo, Museo Marino Marini Fi- renze, Workspace Brussels, Kaaitheater Brux- elles, MAMbo Bologna, Santarcangelo Festival, Viafarini Milano, Museion Bolzano, Biennale Atlas of Transitions, Manifesta 2020 Marsiglia, Archive Books Milano, SAVVY contemporary Berlin, Short Theatre Roma, Oplà/Artefiera Bo- logna, Biennale Democrazia Torino.